Eek! Am doing it and no going back!!
Painting365 starts in 22 days!!! On March 8th  I will officially start painting, posting, listing, and selling one painting every day. These paintings will be sold on my etsy shop for the dollar amount of the day (for example, on day 13,the painting will cost $13). To start with the paper size would be roughly 6” x 6” with medium gouache/ watercolours.

This is inspired by Emily Jeffords who did this few years back, am doing it so that I get into habit of posting my artworks to sell on my site rather than me just hoarding them and not letting them go. This is also to celebrate a big bday for myself.
Would you like a painting for yourself?? I would love to paint a painting specifically for you it for your loved one! Send me a photograph of one of your beautiful memories/ keepsake, and I will paint it!
Posted by Parmeet Arora Bori at 3:21 PM No comments: 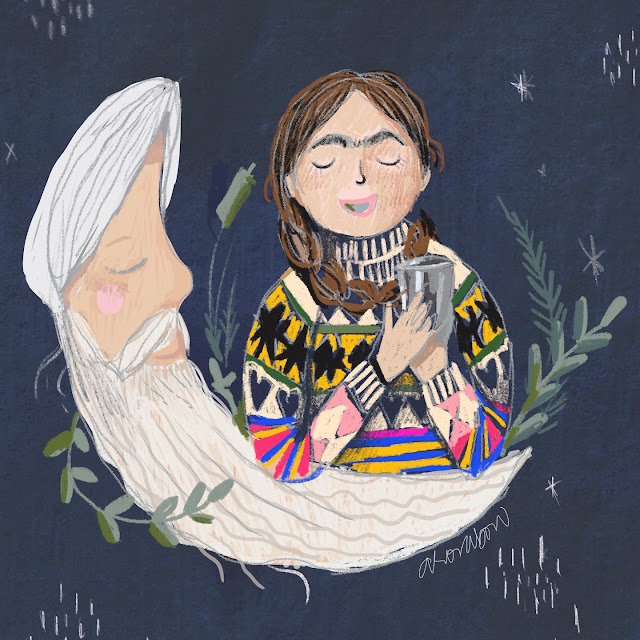 Created part of the #drawthisinyourstyle challenge by @littleyellowgherkin at insta. Indian lullaby ‘Chanda mama’cradle, me enjoying my bounrvita milk in my retro jumper, I really Love that jumper and wish we still had it…. I would look so cool n retro!!!

"Self-sabotage refers to behaviours or thought patterns that hold you back and prevent you from doing what you want to do."

How many times have you done this? I have done it plenty, I did it this morning and few minutes back, thats the reason of m writing this post. Not saying am proud of it on the contrary I am sharing this to bring a change in my daily tasks.

I usually hold myself responsible for many things but I never take the responsibility of being my worst critic.I can easily motivate people I love motivating fellow creatives but the struggle to keep a vision for myself gets lost quite easily. Yes I have achieved many things but I have also pulled my foot backwards from stepping towards my dream. If you do it to or did in past how did you come out of it? Did you know The most common self-sabotaging behaviours include procrastination

After recommendations from my sister (my Mentor /Coach) i have started reading to Psycho cybernetics and also started practising Silva Method, these practices have made me realize one major thing among many - we need to be aware of our limiting beliefs, our fears and then move on. As we move on, staying aware of the patterns we push ourselves into...the things that show up over and over again we can tackle them much easily. My biggest sabotage pattern is whenever I decide of a big goal instead of working on it or writing it down I will do everything else. Small jobs will start appearing in front of me - small design projects thats show me money flowing in or has urgent requirements, then housework or the family or internet!

1) Write down my goals not only my daily tasks - Read my long term goal, mid terms goals and short term goals.

3) B aware when a task comes in -how urgently does it need my attention? and why is it urgent? Only do the task till after I have completed something from my to do list that will take me a step closer to my dream.

4) Say/ appreciate myself/ compliment myself be a small task or big or even if its a i made good tea! or i look nice

I am over all going to be aware why am i don't what am doing!  Please share with me if you found a way to deal with self sabotage.

Posted by Parmeet Arora Bori at 8:54 AM No comments:

Day 1- Moon
Been wanting to take part in Folktale week on Instagram. Thought if the first prompt quite hard it’s only when I was getting my little one to sleep while listening to one of night prayers it clicked. I love the Aarti and this time was listening to Satinder Sartaj’ Aarti the translation helped me imagine the visual. 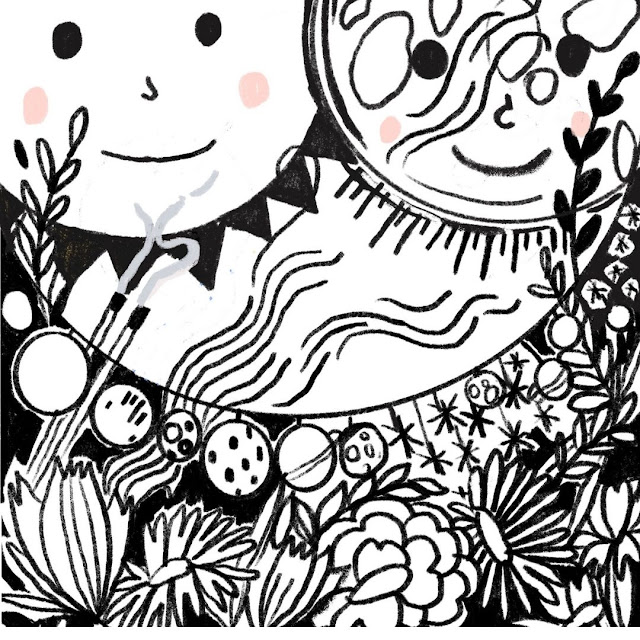 The Sky is Your platter, The sun and moon are the 'Deepaks' the lamps (lights), The Stars in the sky are the pearls,
The 'Dhoop' (Incense) is the fragrance, That the wind propels, The whole forest is Your flowers.

O! What a wonderful Aarti, this is!
You, are a destroyer of Fear,
The sound of Your Name, which is so subtle, that It goes unheard,
Resounds endlessly.

As per Sikh Chronicles, Guru Nanak visited Jagannath Puri during his east travels, which is a famous pilgrimage center of Hindus. Nanak noticed that the priests were more interested in the rituals and elaborate arrangements rather than in their love for God. So he stepped outside the temple and composed almighty of Nirankar.

Like so many verses I find this one really magical. Sketching this on procreate was really helpful, am still learning but loving every but of it.

Adding more to the Digitals Portrait Series - Childhood Hero Series These are the people who left a mark on me growing up in one way or other.  As I worked on these series creating them on Procreate as a daily practice as been such a lovely learning curve and it helped me to see what i really enjoy. 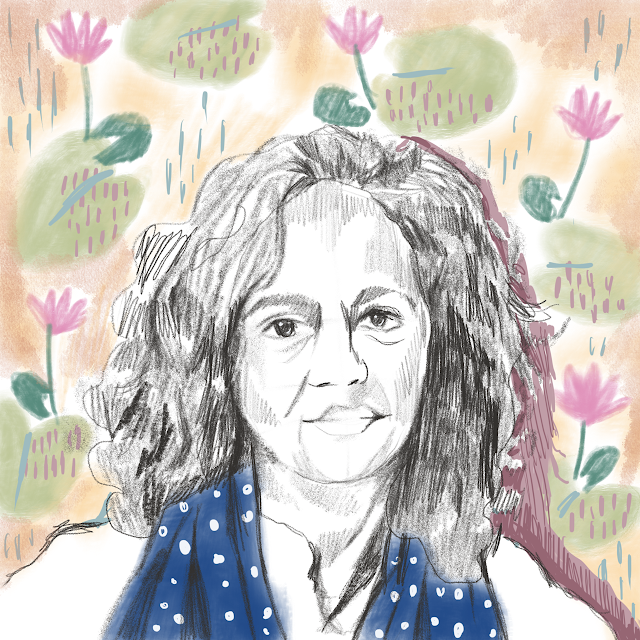 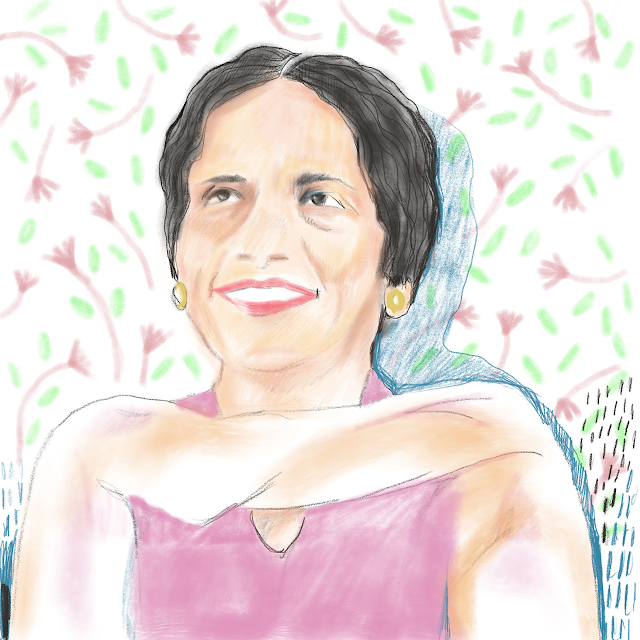 Surinder Kaur
I have a fond memory of hearing her live when I was little in a wedding singing live. I had no idea who she was but sensed her importance in my mom’s voice introducing us to Surinder’s magical voice.
Surinder Kaur was an Indian singer and songwriter. While she mainly sang Punjabi folk songs, where she is credited for pioneering and popularising the genre. For her contributions to punjabi music, she earned the sobriquet Nightingale of Punjab, the Sangeet Natak Akademi Award in 1984, and the Padma Shri in 2006. 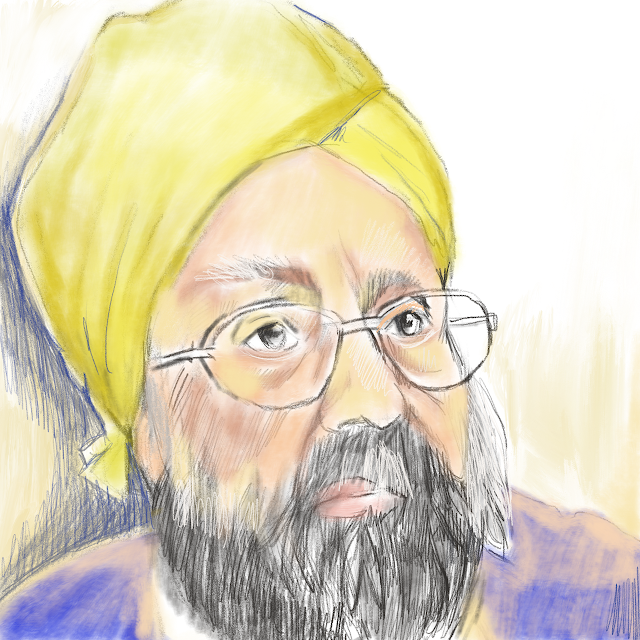 Khushwant Singh-video process
I can’t remember how or went I got introduced to Khushwant Singh’s writings maybe it was from his columns in newspapers. But I do remember reading Train to Pakistan.
When partition came, Singh was a witness to people being killed on both sides of the India-Pakistan border. Train to Pakistan reflects his accuracy and honesty, and was made into a 1998 Hindi film directed by Pamela Rooks. (Extract from @guardian ) 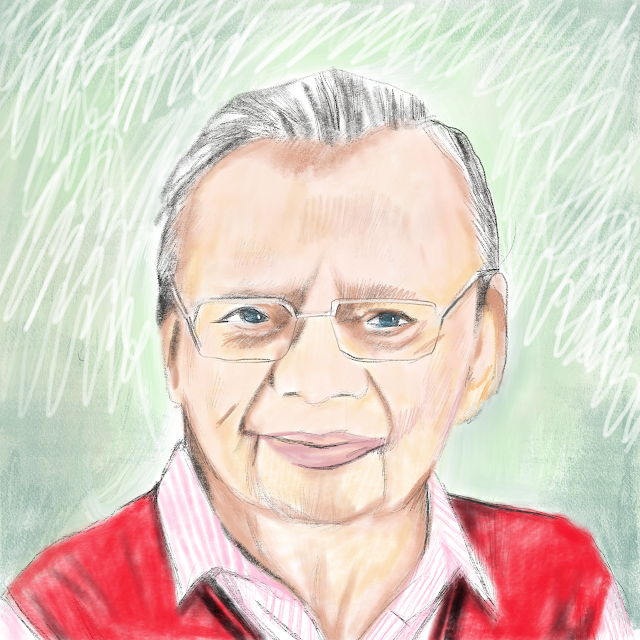 Ek tha Rusty -Ruskin Bond
I think I have to thank DoorDarshan for so many things!!! Like introducing me to Ruskin Bond
Ruskin Bond (born 19 May 1934) is an Indian author of British descent.
Asked what he likes the most about his life, he said, "That I have been able to write for so long. I started at the age of 17 or 18 and I am still writing. If I were not a professional writer who was getting published I would still write."In his essay, "On being an Indian", he explains his Indian identity, "Race did not make me one. Religion did not make me one. But history did. And in the long run, it's history that counts." ( #wikipedia )
Posted by Parmeet Arora Bori at 6:18 AM 1 comment:

Its been couple of weeks, I have been playing on my IPAD !!! It took me some time to take this leap of getting one, I knew it will quicken my process, it will help me manage more on go. This year has been teaching me a lot about abundance and where to look.  Hence this wasnt an easy investment but am so glad i did.
Working on it its so much fun, the brushes etc make so easy and i one knows Photshop its much easier to maneuver.
To inspire me further I jumped in to do my childhood heroes portraits! these are the personalities that indirectly inspired me to pursue art and creative thinking, the general nudges from my family knowingly or unknowingly have helped shape me to what I am. 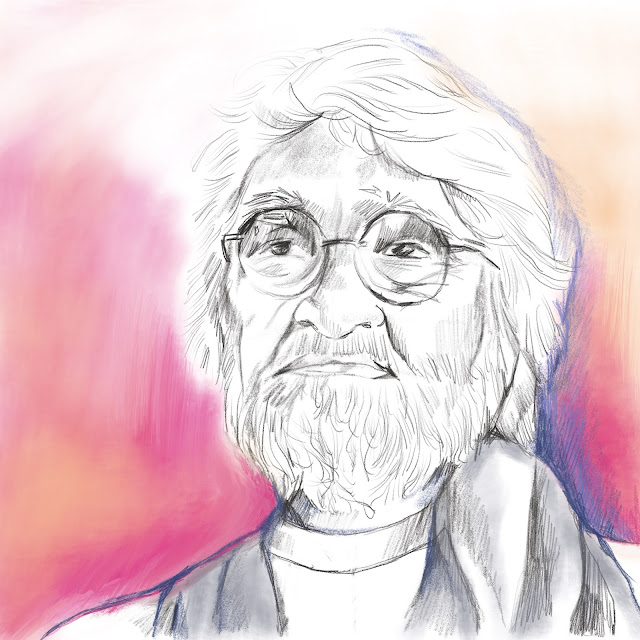 The Above Portrait is of M.F.Husain Indian artist who's painting of horses left such a mark on me...the bright colours and the cubist style. I don't have cubist style but the freedom in his brush strokes was delightful.
On Procreate it took me some time to get the best background, I think with shadow hint, it has come out pretty good. What do you think?

Posted by Parmeet Arora Bori at 3:07 PM No comments:

They say don't put out anything on social media that you will regret later, Am not sure if i will regret this later. For time being I am just going to be honest with myself and share this here especially i know as there is hardly anyone reading this lol! 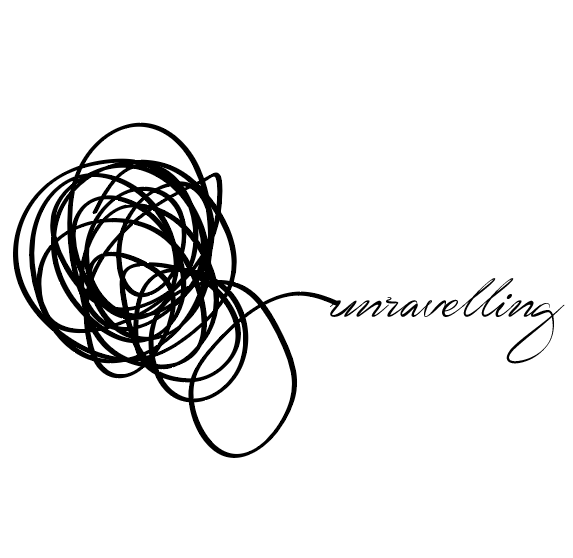 Why do I have a blog? I wanted to share my fun activities, any crazy crafty activities I do, later i thought I wanted so that I can show my life as an artist mom ....but thanks to so many things am on such confused phase of life, that I rather use this as my journal-  share and speak as I feel too. Some days are good than others, right? Today was actually a good day, water park opened up near us, we managed to get some books from library, had lovely freelance work opportunity and got to speak to a friend (well more like a text).

I am an Artist but I Am Surface Pattern Designer, me choosing one of the other will make me any less of OTHER? Currently, I want to create for Homeware/ Homedecor, for Childrens book, for editorials for murals for sleepwear ...i just want too start painting once again over anything that I want! Should i have products in house? should i do drop shipping? I feel as if I get cold feet as soon as time comes for decisions. Well so in nutshell I don't my shit together, atleast not today... But am strong believer in magic and way Universe works...and I know am just on verge of a revelation for myself----- I just need to be open.

Parmeet Arora Bori
Toronto, Canada
Hi! I am Parmeet Arora Bori, an Indian born mixed media Artist/ Illustrator/ Educator, who loves indulging in nostalgia - the comfort ; protection of my joys of childhood and re connecting with what I am passionate about as an individual. Currently I am working on 100daysproject blogging here everyday and creating artwork and sharing progress on instagram #100daysofkeepingoldpromises